Towing Service Called in After Crane Engine Explodes on Highway 400!

Abrams’ towing service was called in to move a 70,000 lb crane at a construction site on Highway 400 in Vaughan, Ontario. The crane was being used to rebuild an overpass as part of a large highway widening project. All was going well and the construction crew was on their last day working with the crane when disaster struck and the crane’s diesel engine gave up and blew up! Thankfully, no one was hurt.

This left the construction team with a massive 70,000 lb problem. The crane was in a hole over 20 feet deep and they had no way to move it! They called in the heavy duty towing experts at Abrams to see if they would be able to recover the crane. The crane was actually fitted with two large tow loops on it’s front end. The only issue was that it was facing the wrong way and would need to be moved prior to winching it back uphill!

The crane operators bought a handheld pump and had to manually pump hydraulic fluid into the crane. This allowed them to turn the wheels and release and apply the brakes when needed. As you can imagine, manually pumping and handling a 70,000 lb crane is a tedious task. Once they finally got the crane in the correct position, the Abrams team used their 50 ton rotator to slowly winch the crane out of the hole.

Fantastic work out there team! Cold weather and a 70,000 lb load are no match for your skills! 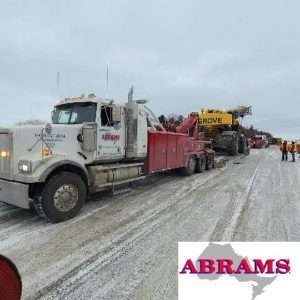 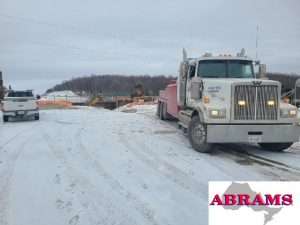 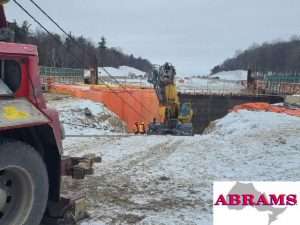 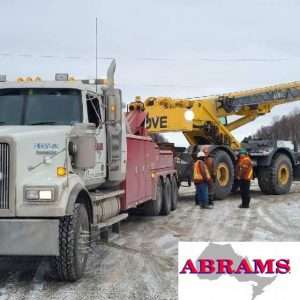 Details of Towing Service Called in After Crane Engine Explodes on Highway 400!