Towing an Accident on a Busy Road with Dave Martino

Towing an Accident Off a Busy Road with Dave Martino

With significantly less cars on the road today due to the pandemic, drivers are less likely to get stuck in traffic and more likely to drive faster. Because of this, we haven’t seen a significant reduction in accidents. Why? Because when people drive in traffic, they usually drive slower and more cautiously. Lack of caution may likely be the cause of Dave Martino’s recent accident call. Dave is a Toronto towing supervisor, which means him and his team are responsible for clearing accidents in cooperation with city police. Dave was alerted to an accident at Sheppard and Bayview in Toronto. Upon arriving at the scene, he noticed a Volkswagen Tiguan and a Honda Civic in a pretty bad accident. 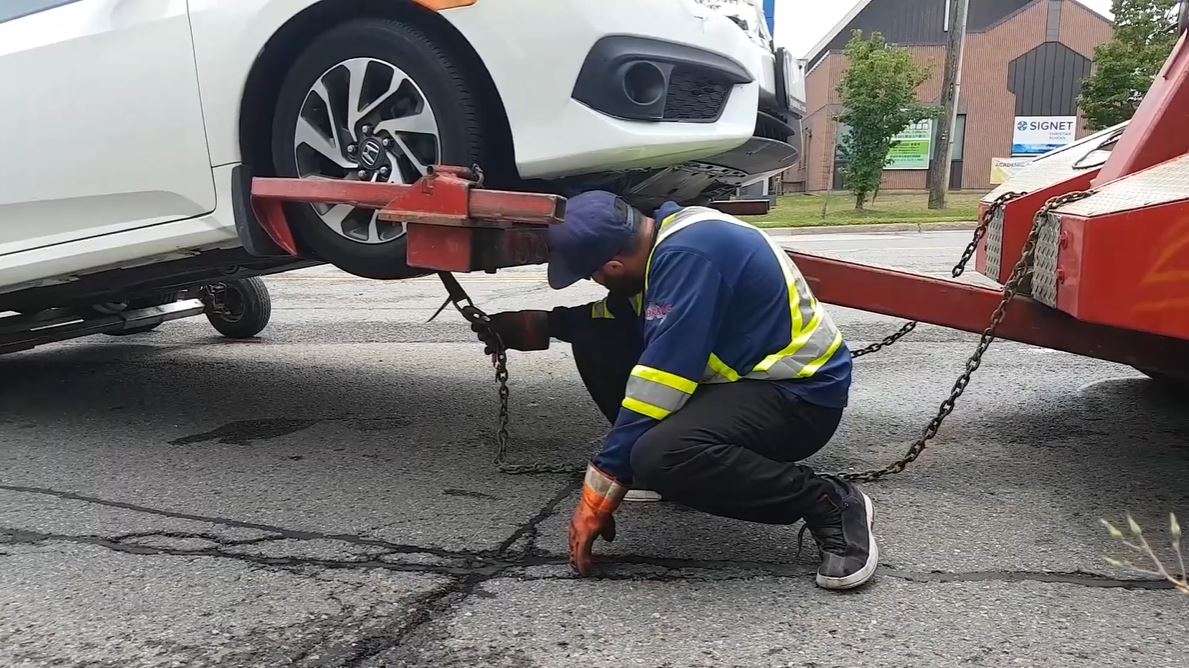 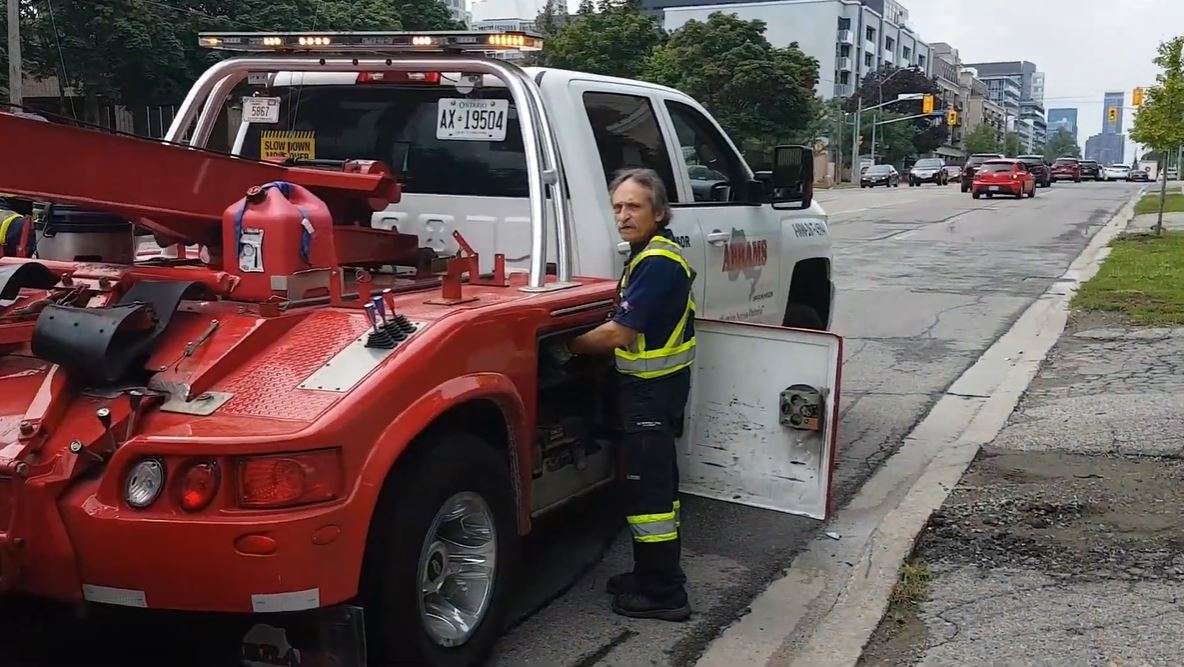 It seemed that the Volkswagen Tiguan was badly smashed from the front, and the structural damage from the front was quite significant. So bad in fact that you could see the engine bay from the front. The Honda Civic was even worse off. The trunk had caved inward from the left quarter, almost appearing as though it was missing the left-half of the trunk space. Fortunately the Tiguan driver was safe, and the Civic driver only had some minor injuries for which he was transported to the hospital in an ambulance. 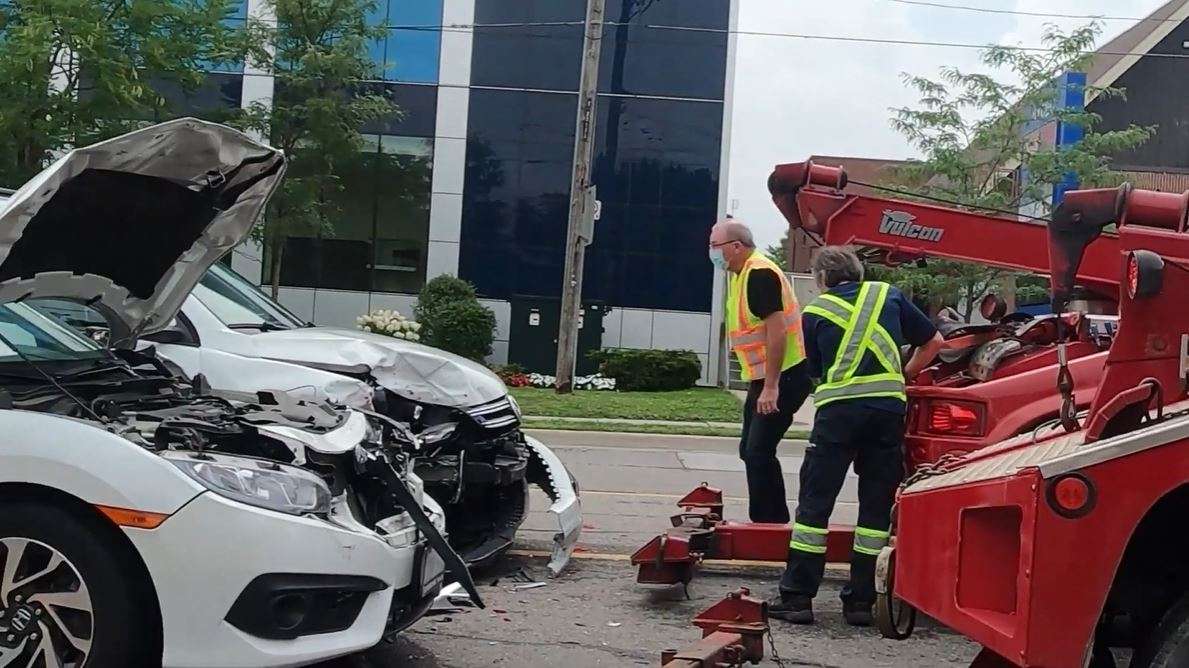 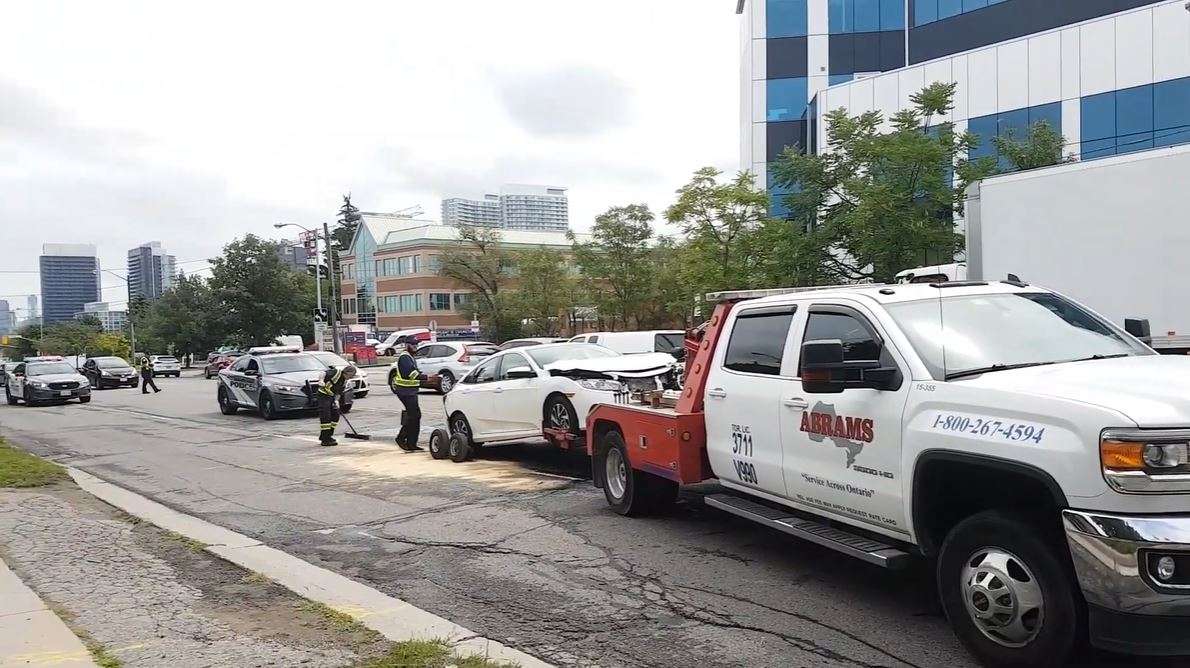 Once the formalities were resolved by the on-scene police officers, Dave Martino and Shelby talked to both drivers and made sure they were okay. After further discussion, they agreed to have their car towed to the Abrams pound, where their respective insurance companies could come by and evaluate the damage. 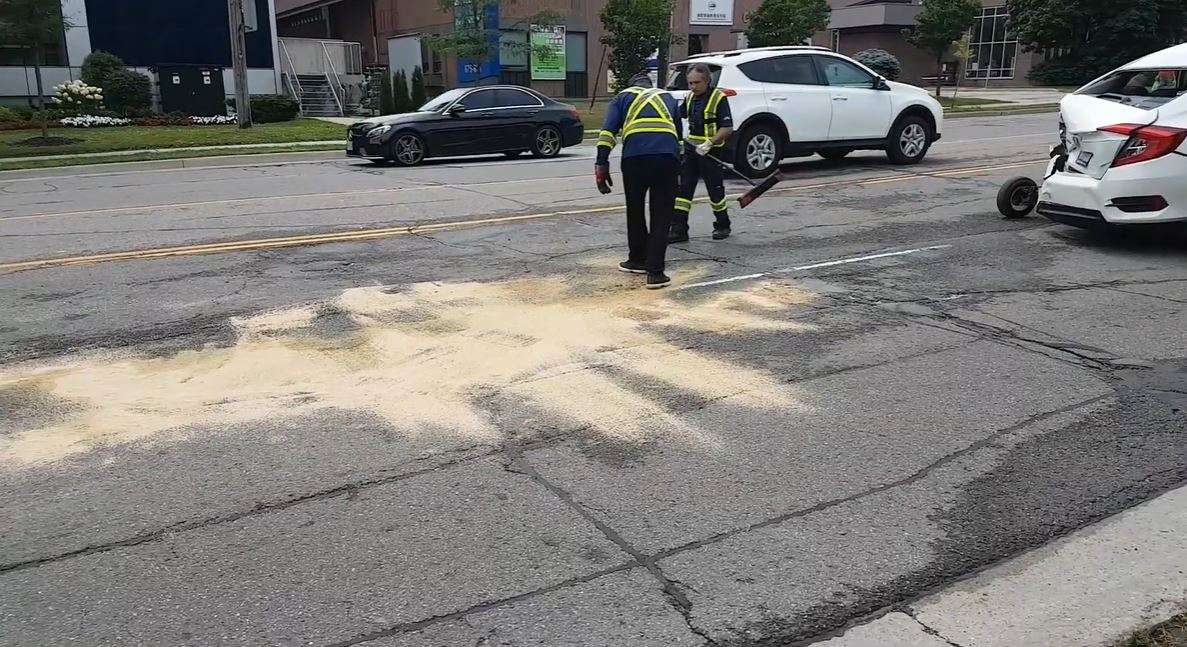 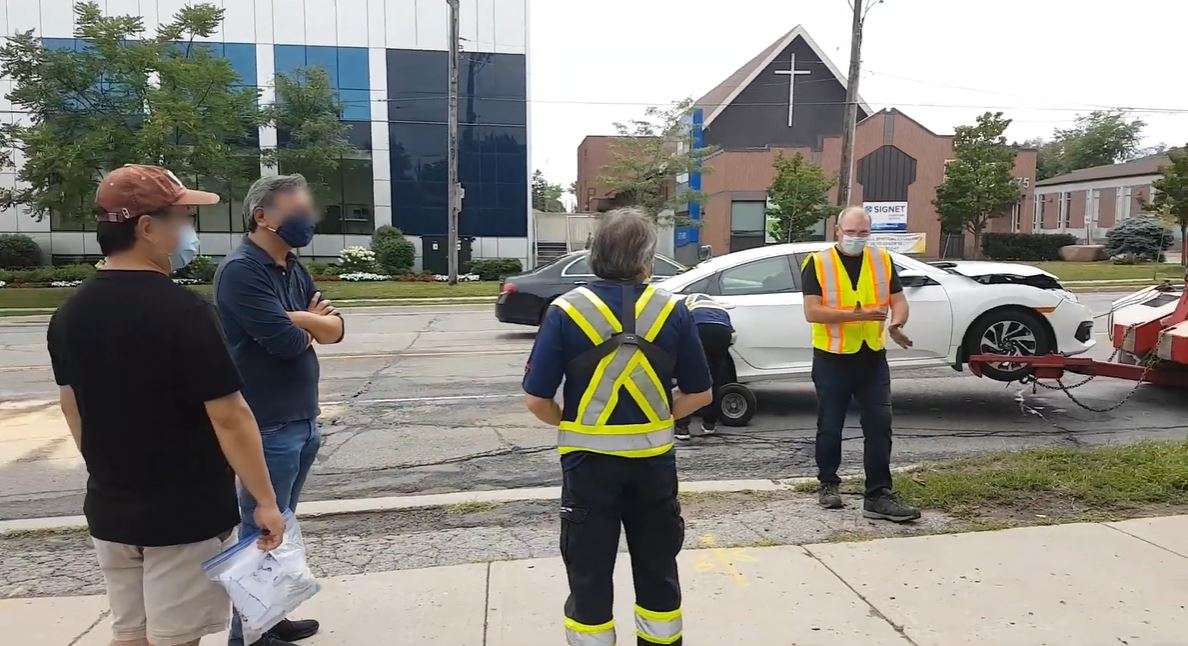 Dave and Shelby then get their brooms out for some old-fashioned street sweeping! Usually after an accident, they are responsible for clearing the debris off the streets. Because the Tiguan and Civic were both hit from their respective front and rear quarters, there were a lot of plastic bits from the headlights and taillights. After clearing the debris, Dave briefed the Tiguan driver on the situation, giving him all the details he needed. 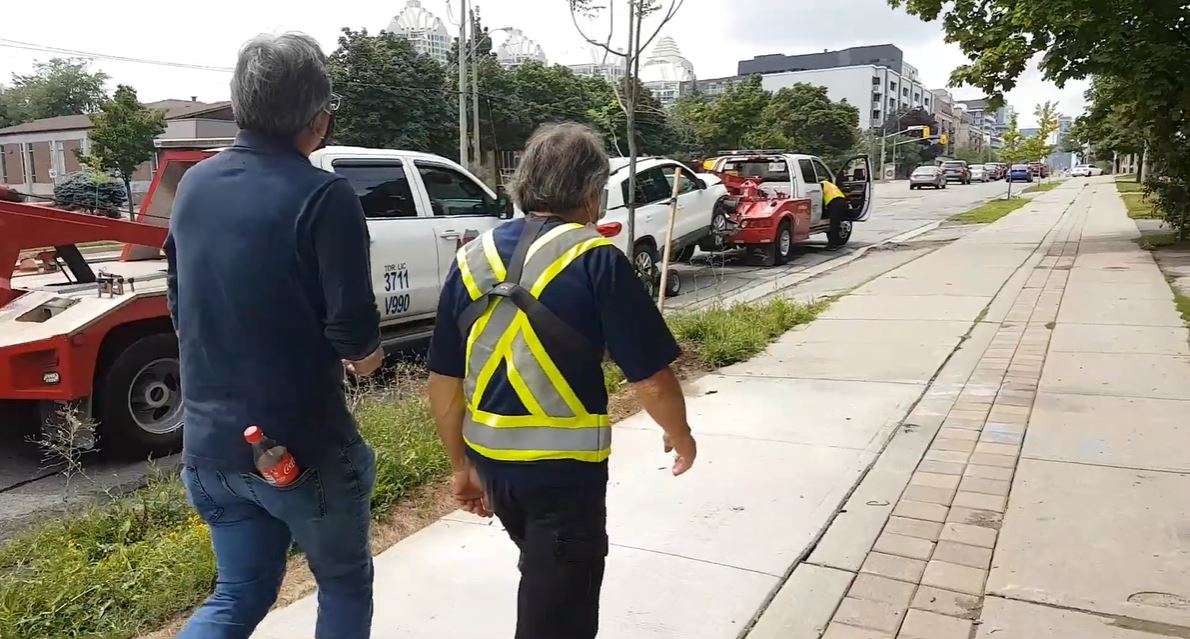 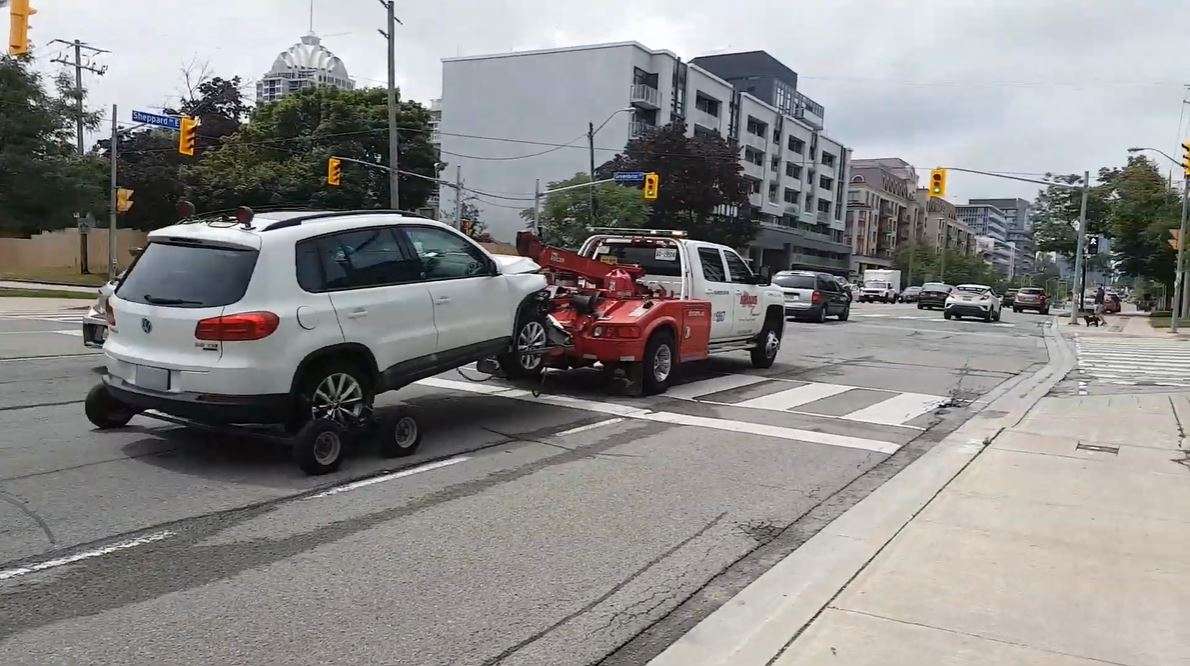 He also asked the Tiguan driver if he needed a ride, but the Tiguan driver said he had already arranged a ride from his friend. The Tiguan driver needed some things from his car, so Dave lowered the car and held the damaged door for him. Dave and Shelby then got into their trucks and proceeded to tow the cars to the Abrams facility. Special thanks to Toronto Police who helped block off the road to warn other drivers and keep our tow operators safe during this task.