A cement transport truck with a fully loaded concrete mixer faced mechanical failure on a concrete yard in Toronto West End and needed semi towing. The truck fell over to the side and Abrams Towing was contacted for assistance and recovery of this unlucky cement vehicle. The incident happened around 5 or 6 pm in the afternoon. Within 30 minutes, our towing team at Abrams Towing in Toronto was at the site to upright the cement truck, using one of their rotator trucks. The towing team used chains to tie the crane to the drum of the cement truck, which is the heaviest part of the vehicle. The truck was lifted back upright on its wheels in less than 1 hour thanks to our expert towing team. The next stage of the recovery involved getting the cement truck offloaded.  The rotator of the cement truck wouldn’t spin anymore and we needed to get the cement out. The team opened the hatch of the drum and added water to flush out the drum. Then, the team used a machine to clean the drum on the inside and a loader was used to get rid of the cement on the ground. After offloading the cement truck and cleaning up the mess, the vehicle was towed to a repair facility. Easy peasy! From arrival at the scene to the drop-off at a nearby repair facility, this job took approximately 4 hours. We are proud of our team, dealing with this situation so swiftly and efficiently. Mechanical failure, cement problems of any kind, overturned vehicles in need of heavy duty towing, you can always rely on us! 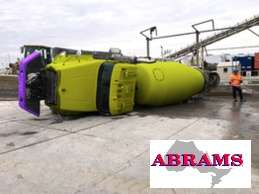 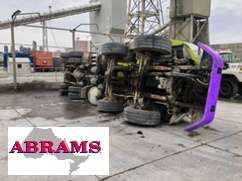 A loaded cement truck faced mechanical problems on a cement yard in West End Toronto. The truck fell over to the side and Abrams was called in for semi towing. Abrams received the call around 5 pm in the afternoon straight after the incident happened and the semi towing crew was at the site approximately 30 minutes later. The cement truck was towed back on its wheels in less than 1 hour using a rotator truck. The semi towing team used chains to attach the crane to the drum of the cement truck, which is the heaviest part of the vehicle, pulling the truck back up on its wheels in less than 1 hour. The truck needed to be taken to repair facilities as the mechanical failure that caused the truck to roll over was not fixed. The drum wouldn’t spin anymore. Before the cement inside the drum would harden, our team offloaded the cement by adding water. The semi towing team then cleaned the drum on the inside and used a loader to remove the cement on the ground. The broken cement truck was towed to a nearby repair facility and the entire job was fixed in 4 hours.